The Lockheed L-1011 TriStar was a medium to long-range, wide-body, trijet launched in March of 1968. The original orders were from Eastern Air Lines for 50 Tristars, Trans World Airlines for 44, and British Air Holdings, Ltd for 50.

Assembly of the first Tristar began in March of 1969, and the of official roll-out was held in September. All Tristars would be built at the Lockheed plant at the Palmdale Regional Airport in southern California near Los Angeles.

It could seat up to 400 passengers, and had a range of over 4,000nm. The aircraft featured vastly improved avionics not found in previous jetliners.

The L-1011 was produced in two fuselage lengths, including the original L-1011-1. The shortened, longer range L-1011-500 variant first flew in 1978, and entered service with British Airways a year later.

The production and sales of the L-1011 suffered from the design limitation of only using Rolls Royce engines, which had serious development problems that eventually forced Rolls Royce into bankruptcy.

Between 1968 and 1984 when production ended, Lockheed produced a total of 250 TriStars.

Today, less than 10 Tristars remain in service around the world. So most airliner spotters have a slim chance of sighting one.

On July 15, 2017, L-1011 N910TE flew from Tucson International Airport to its new home at Kansas City International airport, where it will be part of the "Tristar Experience" educational program. Shown below is a photo of the airliner landing in Kansas City.

The Lockheed L-1011 and McDonnell-Douglas DC-10 are similar in design and size, each featuring an engine under each wing, and a third engine mounted in the tail. The distinguishing difference in the two airliners is the design of the third engine.

On the L-1011, Lockheed used an "S-duct" air inlet embedded in the tail and upper fuselage. Engine exhaust is at the tail of the aircraft.

Engineers at McDonnell-Douglas used a different approach, with a straight-through engine design, with the exhaust in the tail structure itself.

See spotting chart below showing a side-by-side comparison of the Lockheed L-1011 and McDonnell-Douglas DC-10. 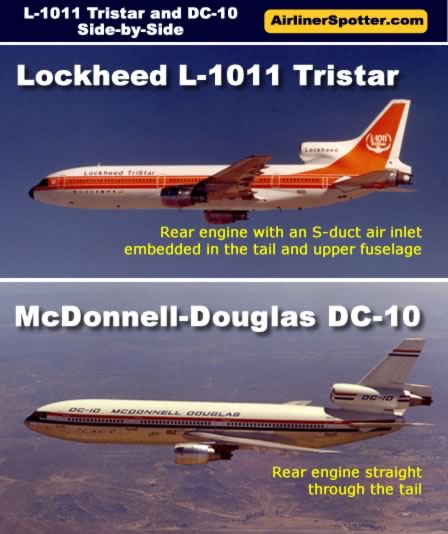 The Flight on Delta's Lockheed L-1011 FRA to ATL

Shown in the photo below is Delta Air Lines L-1011-500 TriStar, Registration N751DA, at the gate at Frankfurt, Germany Airport (FRA), August 1982. It was a smooth return to the United States; our flight over to Europe was also on an L-1011, from Atlanta to Gatwick in London.

Delta ordered a fleet of L-100-500 to operate its new route from Atlanta (ATL) to London's Gatwick International Airport (LGW).

In December of 1998 N751DA was stored for parts at the Mojave Airport in California, and then scrapped in 1999.